Over the Christmas period members had been set a challenge to take photographs based on one of six different compositional techniques or ideas. This evening we met up to discuss the challenges and to share the photographs we took.

The six challenges were to consider the following

Members can find details of the various challenges by following this  link.

Of particular interest was the presentation by John of the ideas that he, Simon, Joe Q and Ciara followed up on in relation to the challenge of Shapes. The group initially looked at triangles and their role in composition both literally and apparently. They then went back to the 18th century and the work of painter William Hogarth. 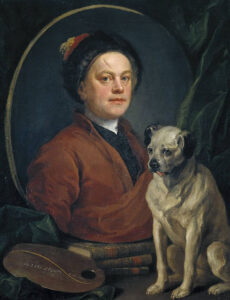 Hogarth expounded an aesthetic called the ‘Line of Beauty’, a serpentine line (S-shaped) that may appear within an object or at its boundary or as a compositional link between objects. This concept is an essential part of Hogarth’s theory of aesthetics as described in his Analysis of Beauty (1753). According to this theory, S-shaped curved lines signify liveliness and activity and excite the attention of the viewer as contrasted with straight lines, parallel lines, or right-angled intersecting lines, which signify stasis, death, or inanimate objects.

In the self portrait at left you can see the line of beauty in his artist’s palette.

Many thanks to all the other members who undertook this challenge and shared their photos and explained the challenge they were asked to complete. A shame that not more members took part though.

Some examples of members’ photos and the relevant composition challenge appear below.