Geoff began the meeting by outlining the programme for the coming months till the AGM on 12 June.

John presented an hour long show about his relationship with The Bespoken Word group, a like-minded bunch of people brought together by poetry. John showed us his shots taken in the backroom of DeBarra’s over the course of many months. 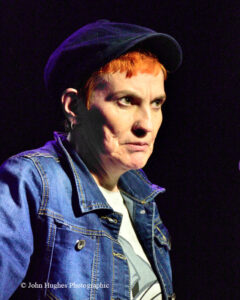 His challenge was to be as unobtrusive as possible and to only use the available light from one source. He also had to overcome the light given off by the heater that filled the room with an overpowering red glow. Over the course of time 2 more lights with barn doors were added to the stage so he was able to arrange a more suitable lighting arrangement for photographing, but even then, more adjustments had to be made to suit some of the poets. John told us how he would arrange focusing in such dull light by using the stage microphone as a point of reference. The camera’s focusing sensor was turned off so that it wouldn’t flash before taking a shot.

Some of John’s images have been used by the poets for publicity posters and on their book covers.

John then went on to explain how the idea of a collaboration between ourselves and the written word came into being. Nick Smith from the Spoken Word realised that people, because of their varying life experiences, could interpret the same words in many different
And John realised that the visuals could and would be just as different too.
He explained the concept to the Camera Club and 8 or 9 members went on to visualise
With the help of Moze Jacobs, the art director at Clonakilty Arts Centre, an exhibition was organised and held in November 2018.

John went on to create a 20 minute slideshow which he showed us. It featured his own portraits of the poets in action, the images created by our members, lines of poetry overlaid with a soundtrack of sympathetic music and some recitation by David Jackson, one of the poets.

Everyone appreciates the time and effort John has put into organising and creating such an interesting challenge and we all hope it’s one that we’ll take part in again sometime.

The evening was finished off with a showing of a short animation called “A Film from My Parish – 6 Farms.” made by Tony Donoghue from Tipperary. The film was a time/motion one that involved many many thousands of still images taken at short intervals and incorporating animations within the still images. The subject was Tony’s passion for old handmade furniture that is still in use today. The film has won many awards, most notably at the Sundance Film Festival in 2008 and at many other film festivals worldwide. Geoff’s daughter Aoife was a compositor and animator for the film.