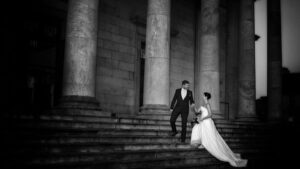 Our guest speaker on Wednesday was Mark Coombes of Mark Coombes Photography and he gave us brilliant insights into his approach to Wedding Photography. His “catch the moment” style is what his clientele want and this he delivers by being as unobtrusive and discreet as possible, but always aware of what’s happening all around him.

Mark began his career as another photographer’s helper and learnt the trade that way by watching and listening. He said that if anyone wants to become a Wedding Photographer then there are many online courses available, or better still to become someone’s 2nd camera and assistant.

Mark showed us several slideshows illustrating the various areas his 12 hour photo shoot covers … namely the Bride preparation, the Ceremony, the time before the Reception where the Bride and Groom are on their own with Mark, the Reception itself and then the party afterwards.

Mark told us of how the digital change has affected his business. When he used film there would be about 300 shots, but now he takes about 10 times as many and that obviously calls for a week’s worth of Post Production editing.

Mark says he gets enormous satisfaction from the job but advises anyone interested in doing this to not give up the day job.

Many thanks Mark for sharing with us your insights and images. 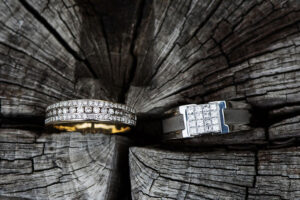